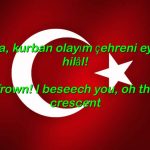 The İstiklâl Marşı (Independence March) is the Turkish National Anthem, officially adopted on 12 March 1921 – two and a half years before the 29 October 1923 establishment of the Republic of Turkey, both as a motivational musical saga for the troops fighting in the Turkish War of Independence, and as an anthem for a […]